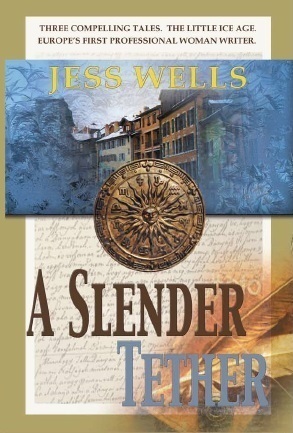 Amid the violent weather of Europe's Little Ice Age in 1395, A Slender Tether offers three compelling tales of self-discovery, including the early life of Christine de Pizan who would go on to become the supreme intellectual of the century and the first woman to make her living as a writer.

BOOK CLUB GUIDE
Description of the book: Amid the violent weather of Europe’s Little Ice Age, A Slender Tether offers three compelling tales of self-discovery, woven into a rich tapestry of 14th century France. Christine de Pizan, daughter of a disgraced court physician and astrologer, grapples with her ambition to be the first woman writer of France. A doctor finds an unusual way to cope with the death of his wife. And opportunity alternates with disasters in the life of four commoners, yoked by necessity: a papermaker struggling to keep his business, a falconer with a mysterious past, a merchant’s daughter frantic to avoid an arranged marriage, and a down-on-his-luck musician with a broken guitar and the voice of an angel.

“Raptor Among the Bluebirds”

1. Christine de Pizan works in the library where there was not a single volume written by women. How do you imagine she would feel as a result? Have you ever felt alienation at this level or exclusion?

2. It has been documented that Christine’s father was more supportive of her scholarship and desire to write than her mother. What do you think the mother’s motivation was to be opposed to her daughter? Why did she change her mind? Do you think she did it for mere survival or because she came to peace with her daughter and her daughter’s ambition?

3. The book opens with a tender friendship between Giles Malet and Christine’s father. Why do you think they were so close? Do you have experiences with deep friendships that seem even closer than marital bonds? What do you think of the metaphor of the riotous banner and the sturdy post? What does it denote? Do you have any relationships like this?

4. Giles Malet was very successful. Why do you think he was so unhappy? Was the jealousy of his wife evidence of her love and devotion, just a mean-spirited streak, or an inappropriate obsession with her standing in court?

5. Christine and her husband had a very happy marriage. Was his support for her limitless? And if not, why not? Did his reaction seem reasonable or was it evidence of betrayal?

6. Both Gilles Malet and Tommaso de Pizan were upset about the transition from King Charles V to the mad King Charles VI because Charles V was learned and kind. Do you see any parallels in your own life with culture suddenly taking a turn for the worst?

7. What was Christine’s reaction when she finally was given the opportunity she wanted? Have you ever experienced this realization or transformation? And if so how did you handle it? Have you ever found yourself stunned when you finally get what you wanted?

8. Was Giles Malet in love with Christine? Or did it seem like a loving friendship?

10. Which scenes are most vivid in your mind?

1. Was this the first you had ever read about sanitation in the Middle Ages? What part of this information surprised you?

2. When did the story become surreal or fabulist?

3. What is your perception of the love the main character had for his wives? Do you see anything of yourself in this character?

4. The main character in this story is stricken with grief and allows himself to die. While his reaction is part of a fantastical story, how has guilt played a role in your life? Have you ever felt that guilt could drive you crazy?

5. Why did the bear wall him up in the ice cave?

6. Had you ever heard of the Little Ice Age before?

7. Which scenes seemed most vivid?

1. Why does the young woman feel freer at the paper mill?

2. Could you picture the process of papermaking?

3. Which scenes are most vivid in your mind?

4. Does the vat man’s blindness give him freedom as well? How does his blindness change his relationships?

5. For each of the characters ask or what does she learn along the way, how do they change and grow because of the events of the story?

6. How else could the events have played out?

7. What are the attributes and flaws of the characters? How are they like or unlike people around you?

8. How has love changed you?

9. How would this story have changed if the mandolin player had not taken her money when he went into the nunnery?