The Mandrake Broom on Amazon.com
Buy your copy of the Ebook here 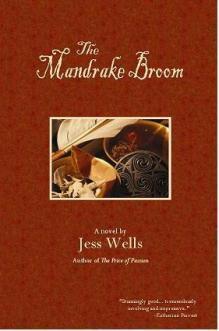 Description of the book: A historical novel set in Europe 1465 – 1540, The Mandrake Broom dramatizes the courageous fight to save medical knowledge during the witch burning times and answers the question “what if the witches had fought back?” Based on extensive research of historical sources, herbal remedies and the medicines of the time, this novel has been called “is "stunningly good...tremendously involving and impressive." Meet:

Luccia Alimenti, daughter of a medical professor at the University of Salerno, Italy, destined to carry ancient texts and herbal lore into the dangerous and groundbreaking future.

Fiona, her Irish godmother who tries to protect her and forge a family while struggling with epilepsy and grief.

Marcelle, a Hunter and co-conspirator as they are pushed to the brink and take up arms for revenge.

Theo Paracelsus, father of modern chemistry, a brilliant eunuch and addict who works with Luccia to forge a bridge between the new and old medicines.

The Mandrake Broom involves the tension between visibility and invisibility, between internal strength and external powerlessness, and the continually fluid interplay of those factors, while it takes the reader through persecution and plague, love and joy, and the struggle for unity.


Discussion Questions:
1. Luccia, the protagonist, goes through several stages in her life, almost morphing into different people. Which one was most appealing to you?

2. One of the author’s objectives was to dramatize the conditions – and the stereotypes -- surrounding the witch burnings in Europe, including the seizure of women on the road, the targeting of women with wealth, the connection between the witch burnings and the plague. How many of these were new concepts to you?

3. What did you think of Luccia’s romantic relationships? Between Jacqueline, the Bowman, and Paracelsus, which seemed to be her greatest love? Which one did you appreciate or identify with?

4. One of the key themes of the book is the interplay between visibility and invisibility. Where is this a dramatized?

5. Another key theme is the idea of external power and internal weakness and vice versa. Who personifies this theme? Where is this dramatized? How does the title The Mandrake Broom exemplify this theme?

6. Why was the invention of movable type such a watershed moment in this story? How did it change the power balance?

7. The Hammer of Witches is an actual book, written by the characters described in the story. Had you ever heard of this as a manual for persecuting witches?

8. This book is set in the period when medical knowledge was being wrested from the hands of female midwives and herbalists, given to men in newly-formed universities that focused on surgery. Is the battle between herbalism and surgery still raging? Are there other parallels with modern times?

10. There are a number of details on how things are made or done in the Middle Ages: how arrows were made, how herbalists gathered their crop, how doctors battled the Plague. Discuss the details of medieval life that most interested you.

11. Which were your favorite characters?

12. What did you think of the ending?