Buddhism for the Hyperactive ...Or...Noisy Buddhism and the Beloved Monkey Mind 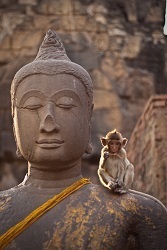 I used to think I was too hyperactive for Buddhism. I have a visceral reaction to phrases like “clear your mind” and “treat thoughts like clouds that will pass by” (a lovely visual but one that devalues the thought.) It felt like yet another instance of the pressure I have been under all my life – sit still, stay on task, march in a straight line, don’t daydream, be more like an accountant and less like a dancer. The superiority of the quiet and contained, left-brained and linear! Arggh! Even walking meditations were a struggle for me because my fellow practitioners were covering 3 feet in five minutes as I was sprinting around the retreat grounds. I found no joy in trying to go to an empty place. To sit still and drain my mind sounded like Orwellian hell, like Stepford spirituality. But then I was introduced to the power of the mantra.

In Buddhist practice one is encouraged to contain or suppress the mind that jumps from topic to topic, distracting you with a mind-bauble here and a silly thought there – the Monkey Mind. As an alternative, I think of a hummingbird, which I consider my totem animal. But I am an artist and in many ways, I consider my monkey mind to be the best part of me. New ideas come from mental wandering, from allowing your mind to jump from a grocery list to a new idea for water conservation, to a great idea about the organic food supply chain, to a child’s toy, and a remembrance of a store in France. Creativity comes in the spaces between two decisions, in the unusual combination of things previously unrelated. And that’s the way both  Read More