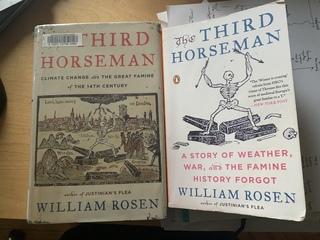 At one point reading The Third Horseman: Climate Change and the Great Famine of the 14th Century, by William Rosen, (Viking, 2014) I threw my hands up and asked the ceiling "can't these people ever catch a break?" Famine, flood, villainy, greed, war, pestilence -- in wave after wave -- hit Northern Europe leaving millions dead and half of the arable land of the entire region washed away forever.

The Third Horseman: Climate Change and the Great Famine of the 14th Century (in a new edition given a new subtitle A Story of Weather, War, and the Famine History Forgot, with a reference to Game of Thrones) is solid scholarship in lively writing.

Here is the tragic chronology:

As Rosen says, "The Third Horseman, riding the black horse, carries a set of scales ... a reminder that famine is a matter of equilibrium: of the delicate balance between life and death. The seven years of the Great Famine, and the evil times that accompanied them, are powerful evidence of how sensitive the scales had become, after four centuries of growth, to a sudden shift in the weather." Page 259

Additional Gems: [all quotes from book except for author's notes in brackets]